So I just got back yesterday from my reunion.  I had so much fun.  The kids and I got to go to Indiana and see my siblings and niblings, and my dad's family and my mom's family.  Three reunions in all.  Crazy!  I didn't get pictures of everything, but here are some.

Andrew and Emmy on the plane at the beginning of our trip Sunday night. 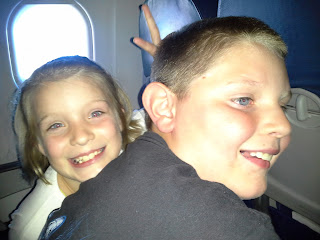 Caelin, Andrew, and Emmy on the way to Middlebury from the Indianapolis airport in our rental car Monday morning. 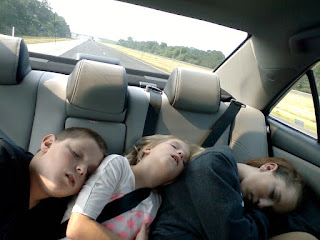 A visit to the Krider Gardens in Middlebury so that Emmy could sit on the mushrooms while dressed as Alice in Wonderland. 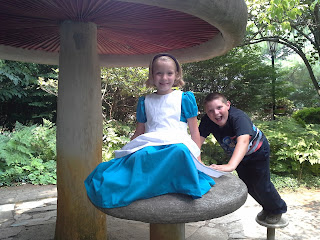 After that we got donuts at the Essenhaus bakery and took them back to our cabin where we were staying.  Andrew had a round creme filled. 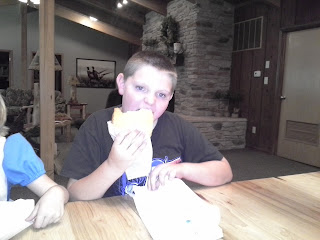 Emmy had a long john like me.  I had to cut mine in half and finish it the next day. 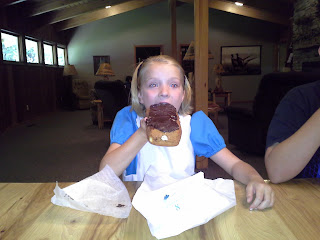 The next morning we went to the Essenhaus for breakfast with my sister Naomi and her kids Cooper and Chloe. 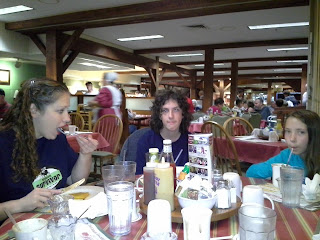 Then we went to a shopping center and got this picture outside the toy store.
That's Chloe as Thing 1, Andrew as Thing 2, and Emmy as Curious George. 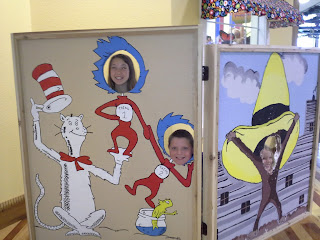 That night we roasted marshmallows and had s'mores. 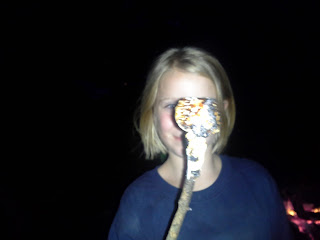 Wednesday we went to Bonneyville Mill park and had a picnic. 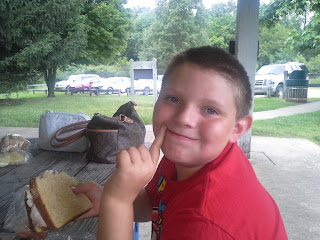 Then we went to East Park across from where I grew up.  There's my brother Samuel watching out for his little daughter with our old house in the background. 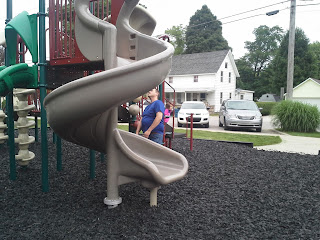 We went across the street to Memorial Park to look at the cannons.  I used to love climbing on these when I was a kid.  Here's Andrew and one of my sister Sarah's daughters. 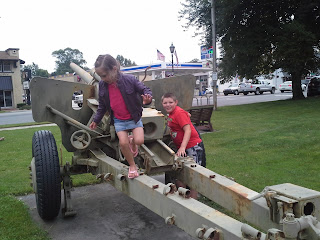 That night we went to my cousin Susie's house.  One of her daughters found some kittens for my kids to pet.  They really liked the kittens. 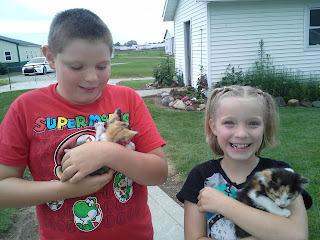 Then one of the girls took my kids for a pony cart ride.  The kids would have liked to sit on the pony, but Susie said it wasn't broke enough yet.  I asked Susie's permission to photograph her daughter. 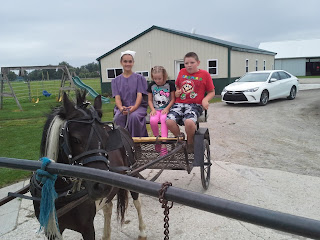 On Saturday morning we went to breakfast with my friend Janelle and her family.  After that we went shopping to find Andrew a new shirt.  That morning I discovered he was out of clean clothes.  We went to Yoder's department store to get him a Shipshewana t-shirt.  Emmy saw this hat and wanted it.  I think she looks like a pilgrim or pioneer. 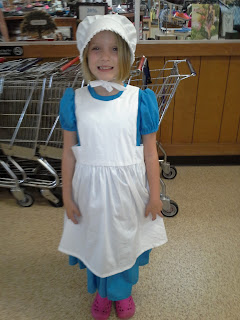 After my dad's reunion on Saturday some of us went to his brother Glen's house.  We were sitting on the porch talking when all of a sudden we heard this thing come putt-putting out of a garage.  Dad just couldn't resist playing with Glen's toys. 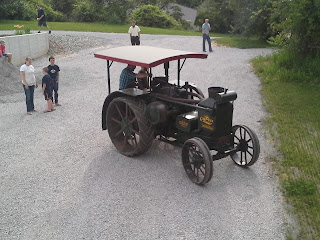 We left for home on Monday and made it as far as Phoenix where we were too late to catch the plane to Reno.  We had to sleep in the airport for a few hours.  Here's Emmy sleeping on me. 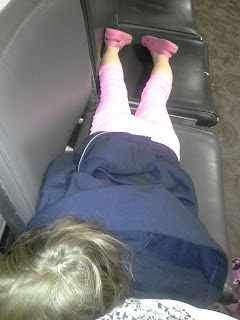 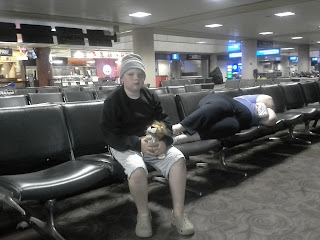 We finally got home 12 hours after we expected, which was fine.  Derek's mom picked us up from the airport.  We were very grateful that someone could make it on such short notice.  I didn't get picture of everything.  I didn't get pictures on Thursday or Friday.  I guess I was just too busy having fun.  Those days we did the talent show, minute to win it games, and my kids and I visited Janelle.
Scribbled By Ruthykins at 4:08 PM

sounds like you had fun...wish I coulda been there...oh wait, I was.

Great times.. I loved the photo of the three asleep in the car, totally how my brothers and I were when we were younger on road trips.