i'm attempting to make apple crisp. i can't wait to see how it all turns out. if it comes out nice then i will make it more often. apple crisp isn't as good as apple pie, but it's easier to make. i hate making pie crust. it is so messy and i never get it to turn out right. my crust always cracks or it too thick. sometimes i just buy the already made crust, like if i really want a good pie, but i don't remember to buy it just all the time so i never have it on hand. i wish that i did so that whenever i want it i have it. i had all the stuff i needed to make the apple crisp, even the oats. that's not something that i usually have, so it was exciting to be able to do something. i got the oats so that i could make no bake cookies a while ago and didn't use all of them. derek hates peanut butter, but no bakes are his favorite cookie. he refuses to believe that they have peanut butter in them. derek's mom says that she's never seen a no bake recipe with peanut butter in it and i've never seen one without it. it must be a cultural thing.

lots of the disagreements between derek and me are a cultural thing. not that we have lots of disagreements, but when we do, that's usually what they are about. no really, we don't argue that much and no, derek did not give me a black eye. i ran into a door. oh, the sling? i slept wrong on my arm. no, i've always had this limp. just kidding. not to make light of spousal abuse or anything because it's not funny, but i just got a kick out of saying all that. that's just sick and wrong. 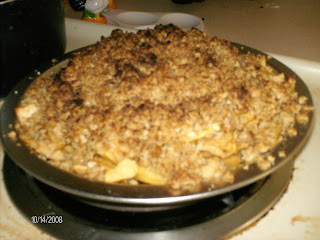 mmmm, just took the crisp out of the oven. looks and smells good. just have to wait until it cools down. see, this morning emmy said that she wanted pie. for some reason she thought that there was pie in the "fridger", but when i opened it she saw there was none, so she got upset. i told her that i would make apple crisp. she was pretty excited. i am too.
Scribbled By Ruthykins at 11:07 AM

mmmm that looks really good!!!! Last year, per Ira's request I was making Apple Crisp at least once a day. It's so easy, and SO yummy!!!!!

i am going to go out on a lomb here and suggest that a lot of differences between you & derek aren't a "cultural" thing, but more of a "coltrin" thing - hahahahaha! (just kidding, derek!)

I was laughing about the black eye and stuff. Does that make me sick and wrong too?

That crisp looks good enough to eat. Was it? I could almost smell it at my house.

The difference between you and Derek is like Mutt & Jeff. Don't know them, google them.

Where is this quote from "and you shall have some pie".

Don't answer so soon. Atleast pretend you had to think about it.

i meant to say "limb" not "lomb" and i HATE that you can't spell check comments. cuz i am always in a hurry and am the world's worst typist...i also made a boo-boo over on mom's blog just now too. oh well. still waiting for the recipe, by the way!